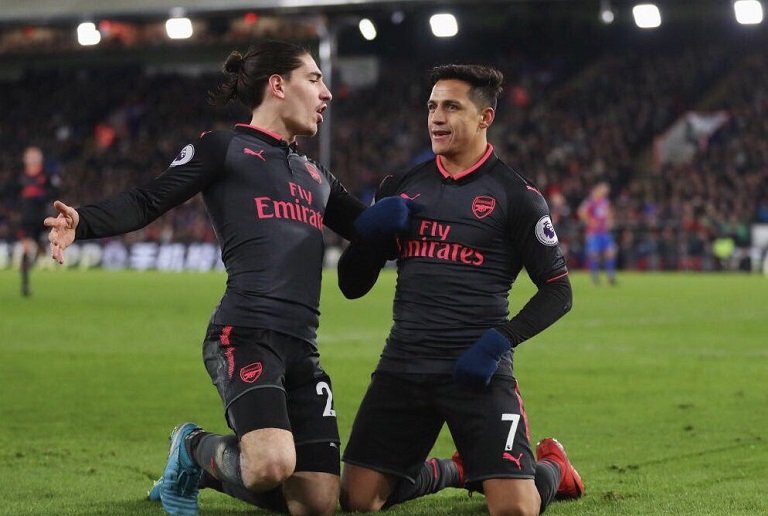 Arsenal boss Arsene Wenger says he is not worried about losing Alexis Sanchez in January despite the forward scoring twice as the Gunners won at Crystal Palace.

The Chile forward squeezed a clinical strike in at the near post to make it 2-1 before bringing Jack Wilshere’s superb ball from his own half under control and flicking into the net.

James Tomkins headed in late on but Sanchez’s double was enough to secure a win that keeps sixth-placed Arsenal level on points with Tottenham, who are fifth, and one point behind fourth-placed Liverpool.

Sanchez’s contract expires at the end of the season and the 29-year-old has been linked with a move to league leaders Manchester City, who failed in their bid to sign him in the summer.

“I am not fearful but that will be a subject that arises because of his contractual situation,” said Wenger, who equalled Sir Alex Ferguson’s record of 810 games managed in the Premier League.

“I can only repeat what I said until now.”

The best and worst of Arsenal on show

After three draws and just one win from their four previous Premier League outings, this was arguably an important game for the Gunners in their bid to remain in the hunt for a top-four finish, especially after wins for rivals Tottenham, Liverpool and Chelsea in midweek.

That's 7️⃣ @premierleague goals this season for our No 7️⃣#ElNinoMaravilla 🇨🇱 pic.twitter.com/dfENKgGfBZ

They started the day with six points fewer than they had at the same stage last season – and Wenger’s side ultimately finished outside the Champions League places – so a positive result and performance was needed to help ease any Arsenal fans’ concerns their campaign was in danger of fizzling out.

For large periods, the performance was certainly there.

The visitors often produced some of their best attacking play of the season, particularly in the first half when Palace could not cope with short, intricate passing that time and again opened up the defence.

But their inability to finish off the many opportunities they created meant their opponents always had a chance to get back into the game.

That proved the case early in the second half when Zaha’s cross caught Arsenal’s defence asleep and Townsend struck.

A five-minute spell of Arsenal disarray followed and the Gunners could easily have found themselves falling behind, but Sanchez – so often Arsenal’s saviour – settled the nerves with two moments of quality.

But even with a two-goal cushion Arsenal were never at ease, and Wenger’s concern about his side’s defensive frailties was highlighted by his decision to replace striker Lacazette with Francis Coquelin late on.

That was still not enough to prevent Palace from reducing the deficit to one, setting up a tense finale.

It has been a strange old season for Crystal Palace.

They set an English football record by losing their first seven league games of the season without scoring a goal, but went into the Arsenal fixture unbeaten in eight matches – their longest such run in the top flight since 1990 and one which had moved them out of the relegation zone and into 16th.

The appointment of Roy Hodgson as manager has played a key role in that turnaround, but so too have the performances of Zaha.

The Ivory Coast forward has been in exceptional form since returning from injury in October and it was his trickery and intuition that allowed Palace to get back on level terms, jinking his way past Calum Chambers before crossing low behind a static defence for Townsend to slam home.

Only Jason Puncheon (32) and Chris Armstrong (31) have been involved in more Premier League goals for the Eagles than Zaha (30), underlining his importance to the team.

The ex-Manchester United player’s form has seen him linked with a move away in January and his departure would undoubtedly be a blow for Palace.

However, they showed in this game – and in recent displays – that they have enough quality elsewhere in their squad to be able continue their progress away from danger.