I'm one of the most misunderstood Nigerian - Okorocha
Advertisement 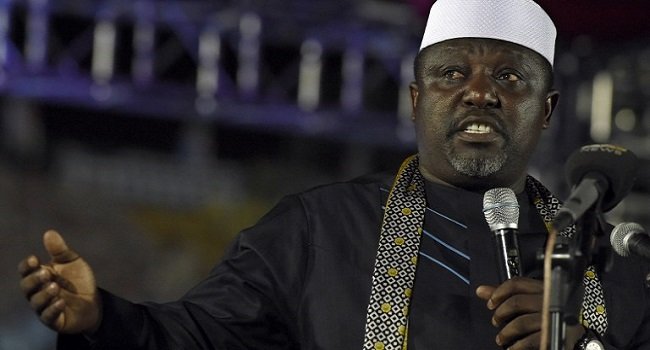 Governor of Imo State, Rochas Okorocha says he is one of the most misunderstood Nigerians

Governor Rochas Okorocha of Imo State jabs at his critics, noting that, he is one of the most misunderstood Nigerians.

He also took a swipe at critics over the statues he erected, the Jacob Zuma visit, the Ministry of Happiness and the plans by his son-in-law to succeed him in the state.

Okorocha says he stirs controversy all around him because the critics lack information and refuse to seek it.

“I have realised that there are so many educated illiterates in this country; analysts without ideas, historians without knowledge of the past”, he says.

On his new Ministry of Happiness and Purpose Fulfilment, he says its creation was a fulfilment of his electoral promise to his people, after all he was elected to make them happy.

It seems that in spite of your well-meaning efforts you draw a lot of controversies in most of the things you do. Can you explain why it is so?

I don’t understand what you mean by controversy. Maybe you will explain. I don’t think there is anything controversial in what I do. It is just that many people don’t understand. There is a complete misrepresentation of facts, and no one seems to understand the depth of my actions and pronouncements. So, they misplace facts. By any standards I will not make a careless statement or take any action that is not proper. I think I am smart enough to know what is good or what is wrong or improper. When some of the things I do are not understood by many, it becomes an issue. Is Rochas a failure in any aspect of life? My business life, my political life, my family life?

You were one of the politicians who came into office with a lot of goodwill because of Rochas Foundation Schools. A lot of people felt that becoming the governor of Imo State was a fitting reward for your efforts. But somehow, some of the things you did turned the picture the other way up. Like when you went to the US, you took a picture with former President Obama and came back to put up a billboard here. Many people were flabbergasted and found it a little bit funny.

I went to the White House in the US and took a picture with President Obama and the picture was all over the internet. That picture was taken after Mr President allowed me to address Obama and I did. When the picture went viral, of course we have supporters. People thought that it was something good and they wanted to welcome me with it, to let me know that the social media is working for them.

READ: Osinbajo, El-Rufai, Fashola reveal the other side of Buhari

Are you saying it wasn’t you that put it up?

No. Why should I? I have never put up any billboard here in Owerri for myself. But people always build billboards of me, some good, some also bad. But why do people use these things to make it sound like government has become a joke? You leave the issues of governance and you are talking about the frivolities of billboards. And they have not seen some billboards that address me as “OKOROAWUSA, a Northerner, a non-Igbo man”.

Did you allow the bad ones to stay?

Of course! I exhibit political tolerance more than anybody. When I say these, I want people to challenge me on issues; not things that make them busy. It doesn’t make sense.

Maybe you should address this Okoroawusa issue. Some people say you are a son of the late Gbong Gwom of Jos, Fom Bot. So, you are a prince of the Jos ruling house. If you are, how did you come to be a governor here?

I think I am one of the most misunderstood Nigerians nowadays. It makes me laugh. I enjoy it, you know why? People do not face the real issues. You know too well where I come from. I am from this state. But I was brought up in the North. The North gave me childhood, gave me education. I was born here. My parents were Igbo. They went to the North in search of greener pasture. I was brought up there. But when I went into business it was my contact with the West that made me what I am in business. I claim, and I know, that I am a successful businessman. I cannot afford to hate the North or hate my people. Whatever they want to call me – Okoroawusa, Okoroyoruba or Okoroigbo – I don’t care because it does not affect my identity. Out of the 15,000 children I have, about 7,000 of them are Muslims. These are my children. They have become members of my family. I can’t love them and reject their religions. These are statements from my political opponents who want to portray me differently to make me look like a jester or a joker.

There is also this is issue of making your government a reflection of your family, naming government institutions after your father, mother, wife and so on, and now ending up appointing your sister as Commissioner for Happiness

No, no, no. That is not possible. No one can be bigger than a state or his country!

No, when I say “bigger”, I mean that this is not the only place I belong to. I mean I have gone beyond being an Imo man, beyond being a Nigerian. I am now an African. So, don’t put me like a small rat in a small hole. I have a bigger image than what people see. If you say I run a family government, that means I run a very big government. I have thirty commissioners. All of them are members of the same family with me. What a fantastic family! I have 27 Special Advisers and 30 Special Assistants. They are all members of my family. I have Perm Secs, all are members of my family. Without running a family government, you cannot make progress.

But if they are talking about biological relationship, that my younger sister is made a Supervisory Commissioner for Happiness and Purpose Fulfilment, I also want to explain that Ministry. But before I go into that, the young lady is my sister. She has committed no offence. My predecessor appointed his brother as Chief of Staff; same mother, same father.

Osinbajo, El-Rufai, Fashola reveal the other side of Buhari