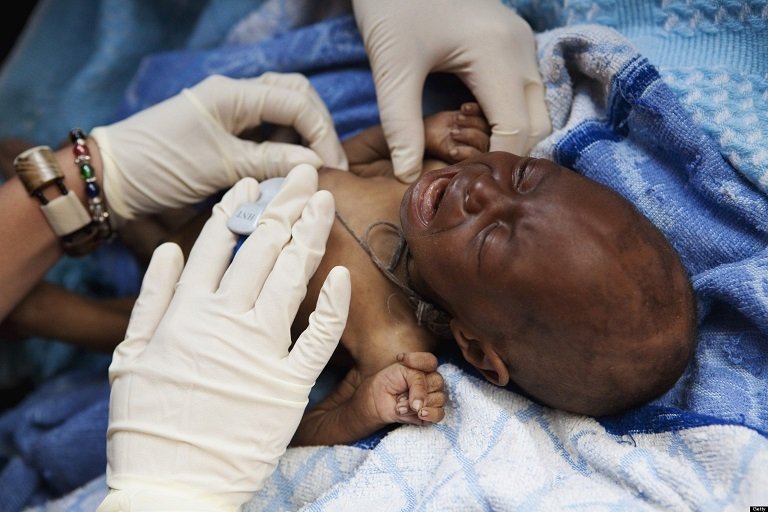 FILE PHOTO: An infant dying Of HIV/AIDS being cared for by medical workers

Umar made this known on Thursday in Lafia in an interview with the News Agency of Nigeria (NAN).

Umar said out of the 1,194 pregnant women who keyed into the Prevention of Mother- to- Child Transmission (PMTCT) HIV programme in 2017, 54 of them transmitted the virus to their babies.

He explained that cases of transmission recorded were due to lack of adherence to medical advice and refusal to take prescribed drugs.

“Science has proven that it is possible to totally eradicate mother to child transmission of HIV if pregnant women adhere to medical advice and take their drugs regularly.

“Those women whose babies tested positive must have refused to comply with their drug regimen during pregnancy,” Umar added.

According to him, the case of mother to child transmission of HIV in the state has reduced over the years due to sensitisation and other preventive measures taken by stakeholders.

He said available records from 2016 indicated that 66 babies were born with HIV.

Umar attributed reduction in transmission of the disease to babies in 2017 to sensitisation and adoption of the PMTCT programme.

He also advised members of the public to avoid acts that would make them vulnerable to the virus, adding “the virus is not yet over hence the need for people to take preventive measures.”

The executive director urged people to get tested to enable them know their status in order to curtail spread of the disease.

He said the state had domesticated the anti stigmatisation law aimed at protecting those living with the virus.

Umar, therefore, advised those being stigmatised on the account of the disease to always seek redress at the appropriate quarter.