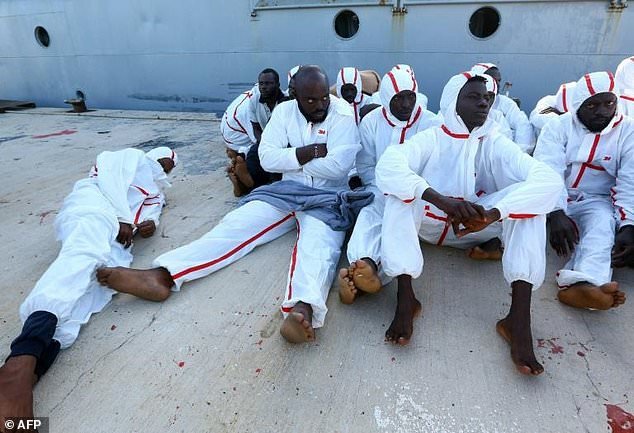 African migrants wait to receive medical treatment at a naval base in Tripoli after over 30 migrants died
Photo: AFP

The Libyan navy says over 30 migrants died and 200 were rescued including Nigerians on Saturday after their boats foundered off Libya’s western coast.

He added that patrols had found 31 bodies and 60 survivors from one boat, while all 140 passengers had survived in a second boat.

“When we arrived at the spot, we found an inflatable dinghy with several people clinging to part of it,” he said.

Libyan navy spokesman Ayoub Qassem told AFP that 18 women and three children were among the dead recovered from the sea, while 40 people were missing.

Migrants from Somalia, Ghana, Ethiopia and four from Pakistan were among those rescued.

Libyan patrol boat commander Nasser al-Ghammoudi said one of the vessels was three-quarters under water when the coastguard arrived.

Libyan paramedics and aid workers stand next to the bodies of over 30 dead migrants
Photo: AFP

“We looked for other survivors for more than five hours,” he said. “We were able to rescue one woman after we heard her shouts.”

A French NGO, SOS Mediterranee, said later Saturday that it had rescued more than 400 people from a stricken wooden boat in international waters further from the Libyan coast.

Other rescue operations were ongoing on Saturday evening, the Italian coastguard told AFP.

Italy’s coastguard, which coordinates the rescue effort in international waters, reported that a total of 1,500 people had been saved on Thursday and Friday.

The large numbers in recent days contrast with a sharp drop since mid-July in the number of migrants being brought to Italy.

On Thursday, the UNHCR put the number of arrivals at Italian ports in the previous three months at 21,666, the lowest total registered in four years for that period of the year.

The downward trend has been attributed to a controversial combination of an Italian-led boosting of the Libyan coastguard’s ability to intercept boats and efforts to enlist the help of powerful militias to curb traffickers’ activity.

There have also been moves to tighten Libya’s southern borders, accelerate repatriations directly from Libya and measures to stem the flow of migrants from sub-Saharan Africa through transit states such as Niger and Sudan.

Those rescued by Libya’s coastguard on Saturday were brought back to a naval base in Tripoli where the authorities provided them with water, food and medical care.

Migrants intercepted or rescued by the Libyans are usually held in detention centres to await repatriation, but waiting times are often long and conditions deplorable.

UN human rights chief Zeid Ra’ad Al Hussein in mid-November labelled as “inhuman” European Union support for Libyan authorities to intercept migrants in the Mediterranean and return them to “horrific” prisons in Libya.

Last week, US television network CNN aired footage of an apparent slave auction in Libya where black men were presented to North African buyers as potential farmhands and sold off for as little as $400 (350 euros).

Libya’s UN-backed unity government said it would form a “commission to investigate these reports in order to apprehend and bring those responsible to justice”.

People-trafficking networks have flourished in the chaos that followed a NATO-backed uprising which toppled long-time dictator Moamer Kadhafi in 2011.

The unity government has said Libya is “a victim of illegal immigration, a transit state, not its source”, adding that the only solution is a return to stability.