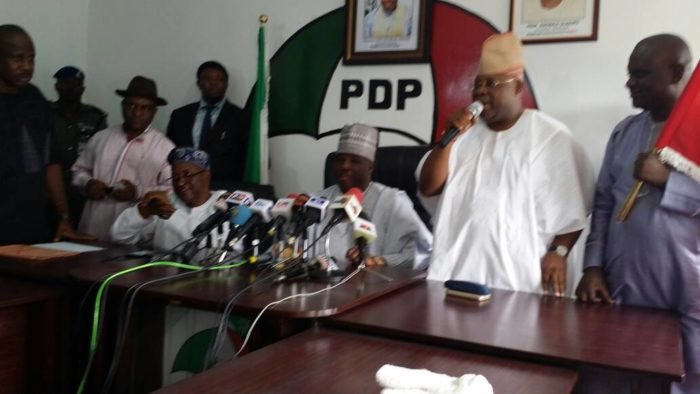 Plateau PDP primaries has been disrupted by thugs

Thugs disrupted the primary elections organised by the People’s Democratic Party (PDP) to decide its chairmanship candidate for Kanke, in the February 18 local government elections in Plateau.

The News Agency of Nigeria (NAN) reports that the thugs, who invaded the Kwall Stadium, venue of the election, beat up members of the PDP electoral committee and officials of the party, and destroyed several cars.

Worst hit in the attack was one Mr. Anthony Joro, a member of the electoral committee, whose eared was mutilated.

Also hit was Mr Dauda Waptu, the PDP Chairman in Kanke Local Government, who sustained various injuries on his face.

NAN reports that the election, which began peacefully with delegates voting after accreditation, turned violent when it was Waptu’s turn to vote.

Trouble started when some of the delegates said he should not be allowed to vote because they did not recognise him as the party chairman, a position others vehemently rejected, insisting that he was the leader and must vote.

The argument later turned violent and the thugs, usually fenced off the voting centre, invaded the arena and attacked their targets.

Mr Tyopev Terna, Public Relations Officer of the Plateau Police Command, who confirmed the incident, said that the Police were already trailing the political thugs that disrupted the exercise.

“We have not arrested anyone, but we are investigating the matter; the thugs beat up many people and destroyed several cars. We shall not rest until they are fished out and dealt with,” he told NAN.

He advised politicians to adhere to the rule of the game, warning that anyone found culpable in the Kanke incident would not be spared.

Speaking on the incident, Waptu expressed surprise at the attack that disrupted the exercise.

“The list of delegates for the election was okayed by all members. I still do not see any reason why anyone will want to disrupt the exercise,” he said.

He accused an unnamed member of the House of Representatives of sponsoring the thugs, and described such attitude as “crude and primitive”.

He blamed the incident on alleged mischief by a member of the House of Representatives “who appears bent on destroying the party that made him”.

“This same member abandoned the party immediately he won his election in 2015. His eyes are already focused on securing another tenure in 2019, but we have told him to first strengthen the party by uniting its members.

“He wants to control everything, but is not ready to contribute anything, except violence. We have always told him that politics is a game of give and take. We must protect mutual interests if we want to progress,” he said.

Contacted, Mr Tim Golu, who represents Kanke/Pankshin/Kanam in the House of Representatives, blamed the incident on alleged mischief by the party officials.

“The authentic list of delegates, whose election was witnessed and certified, was doctored by Mr Amos Gombi, PDP State Deputy Chairman, who is from Kanke, in a desperate effort to impose his crony,” he alleged.

Golu said that the party officials were warned of the impending danger, but insisted on conducting the primary election “even when they were told that the environment was not conducive”.

“Those who insisted that the primary election must hold should be arrested and held responsible for the unfortunate crisis.

“They changed the list of delegates three times and the people at the wards protested; even after the security operatives and some of us, who sensed danger, warned them, they insisted.

“This incident wouldn’t have happened if they had listened to us; now look at the level of damage and animosity it has created,” he fumed.