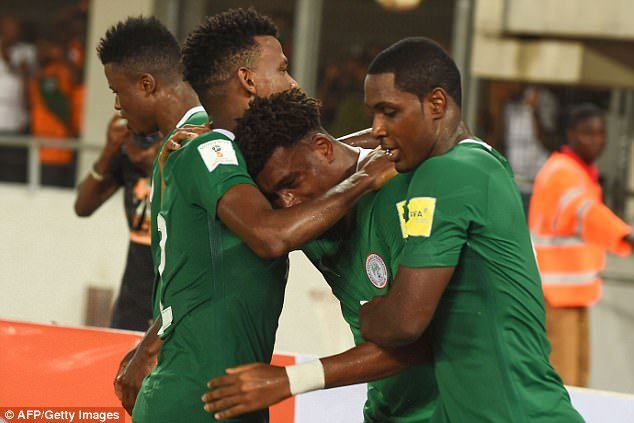 Nigeria booked their ticket to the 2018 World Cup with victory over Zambia on Saturday thanks to Arsenal’s Alex Iwobi strike in the 73rd minute.

Iwobi who came off the bench to score at the Godswill Akpabio International Stadium in Uyo, Akwa Ibom state sent the fans into a rapturous jubilation.

Nigeria began the day knowing victory would be enough to secure passage from Group B and they duly delivered with a 1-0 win.

The goal came in the 73rd minute when Chelsea’s Victor Moses and Abdullahi Shehu linked up on the right, with the latter cutting back for Iwobi to slot home.

Tunisia are on the verge of securing their place in the finals after they came from behind to beat Guinea 4-1 in Group A, with Youssef Msakni bagging a hat-trick and Mohamed Ben Amor also on the scoresheet.

Naby Keita had put a huge dent in their hopes with a 35th minute strike, but Msakni levelled with the last kick of the first half, firing home a free-kick.

The Al-Duhail man then put them ahead with a superb left-footed strike in the 74th minute.

And Ben Amor made sure seven minutes from time as Msakni turned provider on the counter-attack.

There was a final twist to come in stoppage time as Keita was sent off and Msakni capitalised to complete his hat-trick.

Tunisia top the group by three points from DR Congo, 2-1 winners over Libya, with one match left to play.

Egypt can book their ticket if they beat Congo on Sunday after Uganda were held to a goalless draw by Ghana in their Group E clash.