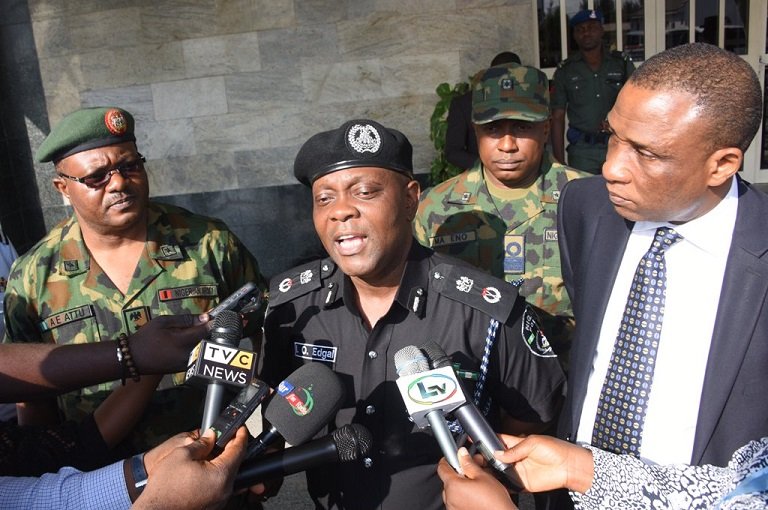 …To Clamp Down On Okada Plying Restricted Routes

The Lagos State Government has set up a Joint Tactic Squad comprising of officers of all the security agencies to heighten security within and around Model Colleges and all schools in the outskirts, riverine and other vulnerable areas of the State.

Briefing Government House Correspondents after the monthly Security Council Meeting chaired by the State Governor, Mr Akinwunmi Ambode and attended by commanders of security formations operating in the State, the State’s Commissioner of Police, Imohimi Edgal said the State Government has also resolved to vigorously enforce the State Traffic Law prohibiting operation of commercial motorcyclists popularly known as Okada riders in certain routes across the State.

Edgal, who briefed journalists alongside other security chiefs in the State, said the enforcement of the ban on Okada would take place immediately after another round of public enlightenment campaign on the dangers and security implications of plying Okada on restricted routes.

On security along the coastal areas, Edgal said in the past few weeks, a lot of efforts have been put in place toward fortifying security in the riverine areas, including Model Colleges and schools in such areas.

“Security around our coastal areas has also been fortified and the Council deliberated extensively about this particularly as it relates to security of all our Model Colleges and other schools that are situated in vulnerable areas.

“I have taken a tour of all the Model Colleges; all lapses observed have been noted by the Council and the Governor has given instruction that all those lapses be taken care of immediately. We now have Joint Tactic Guards of both the police and the military in all Model schools to heighten security,” he said.

The CP said the Council also deliberated and reviewed the security situation in the State especially now that the Ember months had set in, and resolved to increase police presence across the State.

“Recall that most of the bridges are being cleared. This effort is geared towards displacing hoodlums who might want to use such areas as hideouts.

“We also talked about the influx of commercial motorcycle operators known as Okada riders. The Council has resolved to enforce the Lagos State Traffic Law prohibiting their operations in certain parts of the State.

“The enforcement will come up very soon after a lot of enlightenment because we have noticed that with the ban on commercial motorcyclists in some other states of the federation, there is that tendency that they might want to migrate towards Lagos,” he said.

Besides, Edgal disclosed that the Council has approved the resuscitation of the Joint Inter-Agency Raids Committee that will take care of raids on areas that are designated as black spots where criminals hibernate, such as uncompleted buildings, markets, among others to ensure that all areas where hoodlums hide or hibernate in the State are adequately protected.

He also said that the Council has approved partnership with the informal policing sector in all neighborhood across the State to stop the trend of residential robberies.

Also, the CP said all those involved in the heinous murder of the winner of 2007 Gulder Ultimate Search, Hector Jobateh have been arrested including the principal suspect who fired the shot that killed the victim, saying that all the suspects would soon be charged to court.

He, however, urged members of the public to continue to support the police with useful information and tips.

“Let me use this opportunity to appeal to Lagosians to be vigilant at this time. If you see something, you must say something. You must partner with the police and security agencies.

“Partnership is key because it is the only way information can flow and I want to assure residents that information given freely, the confidentiality of the informant will be taken with utmost seriousness.

“I have told my officers and men and I know my colleagues in the other agencies have done so. We cannot win the trust and confidence of the people if we do not dispense with unethical conduct such as divulging sources of information,” Edgal said.

Also speaking, Secretary to the State Government, Mr. Tunji Bello said the Council deliberated the recent restriction order on inter-state buses along Ikorodu Road, saying that all the identified setbacks have been considered and were being addressed.