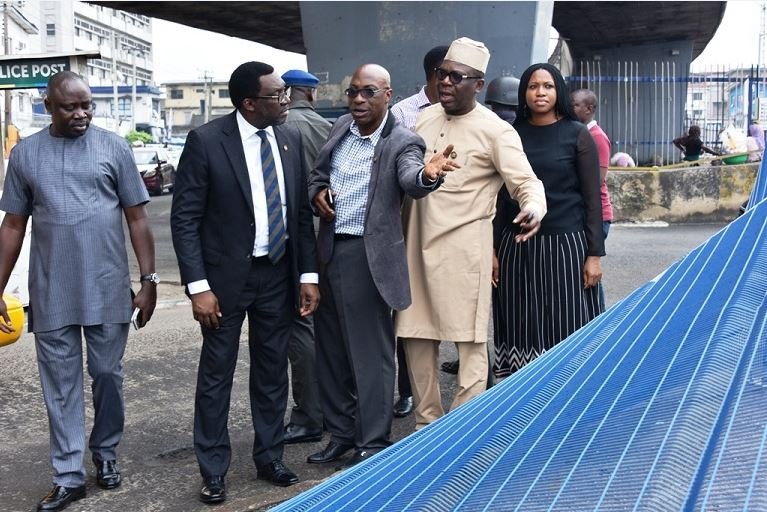 The Lagos State Government on Wednesday announced the restriction of the operation of inter-state buses and vehicles operating along Ikorodu Road from going beyond Ojodu Berger and Ojota Motor Parks.

The State Government has also issued a seven-day ultimatum to the operators to relocate to the designated inter-state motor parks at Ojodu Berger and Ojota, after which stiff sanction would apply to defaulters.

Speaking after embarking on a joint inspection tour of ongoing construction of Modern Bus Terminal at Yaba and the beautification project at Jibowu, the State’s Commissioner for Information and Strategy, Mr Steve Ayorinde said the decision of the government was in line with the determination of Governor Akinwunmi Ambode’s administration to free the city of avoidable nuisances and install sanity and civility in the environment.

He said the inspection was a follow-up to an earlier visit by the Governor to the area, adding that all the necessary quit notices have already been served on the affected operators.

He said: “This is a follow-up on the visit of Governor Ambode to this axis last night and was very displeased with what he saw particularly in the manner with which long buses, inter-state buses are using the main town and what we have done so far is the initial announcement to say that henceforth, we will no longer allow inter-state buses to be along Ikorodu Road.

“Henceforth, they will have to go to Ojota and Ojodu Berger which are the two designated inter-state motor parks. The ones that we have here in Jibowu will have to move and there is a 7-day ultimatum for everyone of them beginning from the ones in this axis to move,” Ayorinde said.

Speaking on the reason for the ban, the Commissioner said activities of the operators had not been tidy and decent despite repeated warnings, and that government could no longer sit and watch such to continue in the overall interest of the people.

He said: “Take for instance, the new Jersey Barricades here are being destroyed and they are built with taxpayers money. Yes, the initial accident was caused by a vehicle but we have seen people showing disrespect to taxpayers money and that we can no longer allow.

“We have also see the way vegetal nuisance have taken over everything particularly areas that are being used by the operators of the inter-state buses inspite of the repeated warnings that this is no longer acceptable.

“Sometimes you come here late in the night and you encounter criminal elements and the government is saying we can no longer take this.

“In the overall interest of the public, what is tidy, what is decent and civilized is to move them where they really belong so that we can free the city and you know what we are doing in terms of the overall plans for the city.

“There are major bus terminals springing up. People have seen what we are doing in Yaba which will be ready by December; they have seen what we have done in TBS and Ikeja, which are all part of the overall plan. And part of what the Governor has said is that every area like that, we will add a beautification plan to it.

“So, what we have done is in the best interest of Lagosians, taxpayers and the public,” the Commissioner said.

He, however, urged affected stakeholders to work with government, assuring that the development would not in any way affect their businesses and livelihood.

Also speaking, the State’s acting Commissioner for Transportation, Prince Anofiu Elegushi said the ban was part of the plan of the government to properly utilize spaces under flyovers and bridges.

He assured that government had already provided more than enough spaces for the affected operators at Ojodu Berger and Ojota, saying that a stakeholders’ meeting would also be held on this week to discuss and allocate spaces for operators at the said parks.

He said at the expiration of the ultimatum, government would enforce the ban and any operator who flout the directive would be seriously sanctioned.

On her part, the new General Manager of Lagos State Parks and Gardens Agency (LASPARK), Bilikisu Adebiyi-Abiola said government was already working on an intensive design for the beatification project to be sighted within Jibowu and Yaba axis, adding that the project would soon be implemented.

She said the project was part of general Greener Lagos Plan which the present administration had set out to achieve with the taking over and beatification of blighted areas across the State.

“The Greener Lagos Plan is for the benefit of all Lagosians so that our children can use them and it is also important for our health because we are going to introduce greenery, trees and plants that would help the environment,” she said.

She said areas such as Lagos Island, Mile 2 and Festac were currently being considered for the beatification project in the short time, while there are massive plans to extend the project to all parts of the State.

On the issue of quality assurance, the new LASPARK boss said the agency was already working with contractors and partners to comply with the standards, while also assuring that the agency would enforce compliance with the required standards.