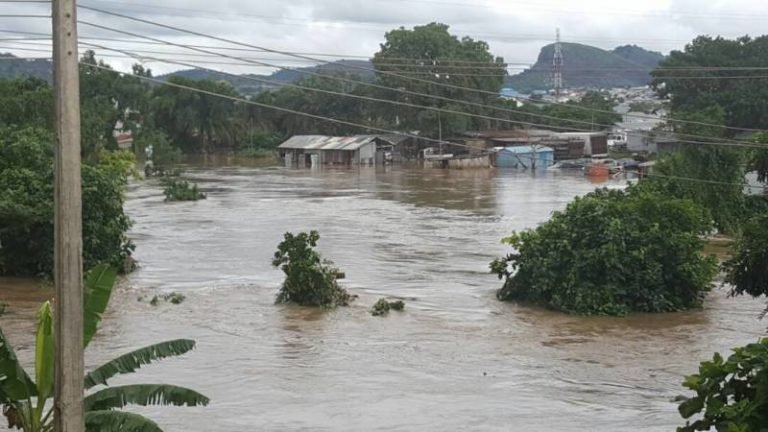 The devastating flood in Kogi

Two communities in Kogi, Okudigbo and Odochala in Ibaji Local Government have been submerged by flood which also destroyed property.

The increasing menace of flood has forced the Kogi government to declare a state of emergency on environment and decided to give priority to environmental issues.

The state Deputy Governor, Mr Simon Achuba, unveiled the plan when he received a officials of Ecological Fund Office in the office of the Office of the Secretary to the Government of the Federation.

The officials arrived in Lokoja for the assessment of the flood and erosion sites in Kogi.

He said the government has also set aside the last Saturday of every month as environmental sanitation day to mobilise the citizens to clean their surroundings.

“We are also very lucky to have someone in charge of the ministry of environment who is very effective and proactive in carrying out her duties.

“We are very grateful to the Federal Government for taking up these issues and for giving us the needed support which the state deserves,” he said.

Earlier, Mr Abdullazeez Umar, who spoke on behalf of the team, said that the exercise was approved by the Federal Executive Council, as part of efforts to tackle the ecological problems facing the country via the effective management, co-ordination, monitoring and implementation of programmes.

The Commissioner for Environment and Natural Resources, Mrs Rosemary Osikoya, said that the ministry had earlier presented the ecological reports on 19 local government areas in the state to the team.

She said the ministry had met with the team and catalogued 194 flood and erosion sites in the 19 local government areas with the help of some experts, which represented 50 per cent of the total areas that were supposed to be covered.

She noted the state government last week organised a workshop on climate change and afforestation, which was attended by many stakeholders.

Besides, Osikoya said that the government had reopened the state’s forest reserves, and launched tree planting for the 2017 afforestation campaign.

She complained that aside the increase in traffic due to proximity of Kogi to Abuja, a river in Orokere-Amuro, has also changed its natural course, using the federal road as its flowing path and flooding some communities along its new route.

“We are very excited that the state governor is paying adequate attention to those special environmental issues, which have drawn the attention of the Ecological Fund Office,’’ she said.

Gunmen Carryout Another Kidnap In Lagos