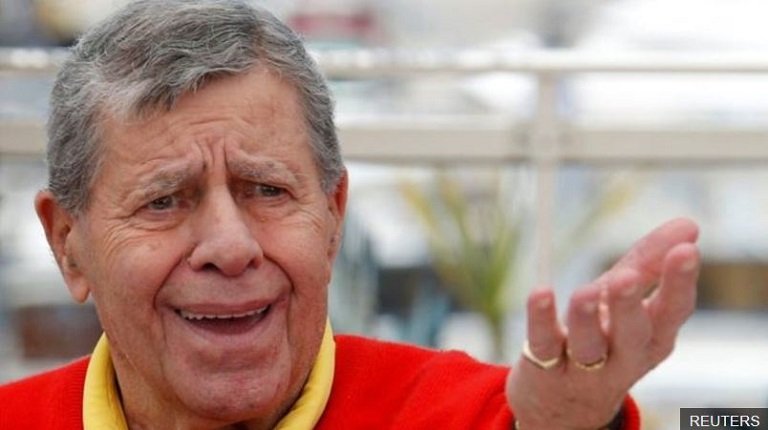 Jerry Lewis became the highest-paid actor in Hollywood, chalking up hits such as The Bell Boy, Cinderfella and The Nutty Professor

US comedian, actor and philanthropist Jerry Lewis, reputed as one of Hollywood’s most successful comedians, has died aged 91.

A family statement said he died of natural causes at his home in Las Vegas on Sunday morning.

He became the highest-paid actor in Hollywood, chalking up hits such as The Bell Boy, Cinderfella and The Nutty Professor.

Other notable successes included The King of Comedy in 1983, in which he played a talk show host stalked by Robert de Niro.

Fellow celebrities paid tribute as news of his death broke. Whoopi Goldberg called it “a gain for heaven, but big loss for comedy”.

Actor Jim Carrey, whose comedy style was strongly influenced by Jerry Lewis, said: “That fool was no dummy. Jerry Lewis was an undeniable genius an unfathomable blessing, comedy’s absolute. I am because he was!”

That fool was no dummy. Jerry Lewis was an undeniable genius an unfathomable blessing, comedy's absolute! I am because he was! ;^D pic.twitter.com/3Zdq9xhXlE

There were also tributes from the daughters of Lewis’s longtime associates Frank Sinatra and Dean Martin.

“Dear Jerry, Dad will be as happy to see you as I’m sad to see you go. Give him one of your bear hugs for me. I’ll always love you,” tweeted Nancy Sinatra.

Deana Martin also wrote on Twitter: “I’m heartbroken at the loss of our life-long friend (Uncle) Jerry Lewis. I’ve loved him all my life and will miss him greatly.”

The White House later released a statement praising “the extraordinary life of one of our greatest entertainers”, adding that Lewis “touched the lives of millions”.

“Jerry lived the American Dream – he truly loved his country, and his country loved him back,” Press Secretary Sarah Huckabee Sanders said in a statement posted on Twitter.

Lewis was born Joseph Levitch in Newark, New Jersey, to Russian-Jewish parents who were both in showbusiness.

He started performing on stage at the age of five alongside his parents.

Lewis teamed up with Dean Martin in the late 1940s, acting the goofy sidekick to Martin’s suave persona.

Over the next 10 years they appeared in nightclubs, on television and in movies, but their partnership ended with a bitter split.

In the early 1970s he made the infamous Holocaust drama, The Day the Clown Cried, about a clown thrown into prison and eventually used to
entertain children and lead them into the concentration camp gas chambers. It remains unreleased.

Lewis was also the host of a long-running telethon which raised many millions of dollars for muscular dystrophy.

In 1995, he became the highest-paid star in Broadway history as Mr Applegate in the musical Damn Yankees. He also won acclaim as a writer.

In his later years, however, he courted controversy with racist and misogynistic jokes, and in 2007 he was forced to apologise after making an anti-gay slur during a telethon.

In an interview, Lewis once said the key to his success had been in maintaining a certain child-like quality, but added: “I’ve had great success being a total idiot.”

“I look at the world through a child’s eyes because I’m nine,” he told Reuters in 2002.

“I stayed that way. I made a career out of it. It’s a wonderful place to be.”

Lewis also achieved great popularity in France where he was hailed as “le Roi du Crazy” (“the King of Crazy”).

He was inducted into the Legion of Honour, France’s highest award, in 1984.

The unity of Nigeria not open for negotiation – Buhari