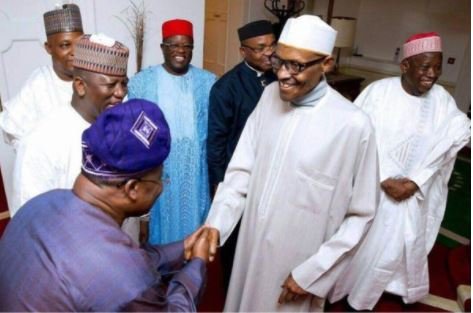 President Muhammadu Buhari has stated that he is happy that Nigeria is selling agriculture produce to people in Burkina Faso and Central African Republic.

Buhari who met with State governors at the Presidential Villa, Abuja on Friday hailed the successes recorded by the country in agriculture in the past two years.

“You are all doing your best and we are lucky our best has proved to be good enough.

“(Our) emphasis (has been) on agriculture and solid minerals right from our campaign days.

“We are more successful on agriculture because I think people could not afford to buy foreign food.

“And all that we have learnt we will revert to the old system that we had of cooperatives right from local government levels up to the centre.

“I am very pleased with the reaction and don’t forget, I was told that most of the food, because Naira has gone down, are being bought by people from Burkina Faso to the Central African Republic.

“That trade has been there for generations and we cannot stop it,” he said.

The President remarked that the devaluation of the Naira was unfortunate but not the making of the present administration.

Buhari stated that people had asked him to be more strict on the border, adding that, “we said that we will be strict on imported food so that our farmers can be more encouraged”.

He also thanked God that last year and this year, the harvest throughout the country was much better than it used to be.

The president expressed elation that Nigerians had embraced farming and had worked hard on their lands to produce more food.

He also commended the efforts by the Vice President in his capacity as acting president during his three month absence from the country.

“He (Osinbajo) exploited his youth and the intellect to be all over the place.

“Thank God that I have the time towards him with the media 24 hours and I congratulate him and I allowed him to come and see me so that I can personally thank him for all that he has done,’’ he said.

The President also stated that he was very happy with all the national prayers across the country which he acknowledged was very much covered and was beyond ethnic and religious barriers.

Buhari thanked the governors for the visit, adding that his moral had been raised greatly by the love shown to him.

The Zamfara Governor and Chairman of the governors Forum, Abdulaziz Yari, had stated that the governors were happy with the recovery and return of the President.

He thanked him for the assistance he gave to the states to enable them to pay salaries, adding that without such support some of the states could not have functioned well.

The Ebonyi Governor Dave Umahi, also thanked God for the recovery of the President and his support to the states in the agriculture sector, Paris Club refund and assistance in salary payments.

Umahi noted that Buhari had treated all states equally in spite of party differences, noting that it demonstrated the unity of the country.

Similarly, governors Simon Lalong of Plateau and Yahaya Belĺo of Kogi States told state House Correspondents that the country was lucky to have the President back and expressed their hope that the administration would provide more for the people.

Hasana Lawal retires after 72 hours as Kogi Head of Service