Ex-convict Dariye to run for senate under Labour party 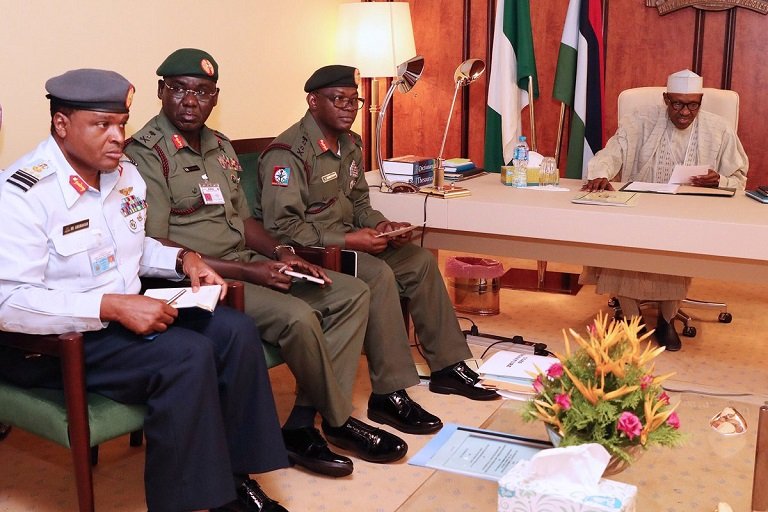 President Muhammadu Buhari who is working from home received service chiefs at the Aso Villa in Abuja, Nigeria’s capital

President Muhammadu Buhari on Tuesday met behind closed doors with members of the National Security Council in the Presidential Villa, Abuja.

The News Agency of Nigeria (NAN) reports that the meeting, which started around 11:15 a.m., was still ongoing as of the time of filing this report.

It is being attended by all the service chiefs, National Security Adviser, retired Maj.-Gen. Babagana Monguno and Director-General, Department of State Security, Alhaji Lawal Daura.

President Muhammadu Buhari who is working from home received service chiefs at the Aso Villa in Abuja, Nigeria’s capital

It would be recalled that President Buhari on Monday in a broadcast to the nation charged the security agencies not to let the successes achieved in the last 18 months in the fight against insurgents “be a sign to relax”.

He said in the broadcast that “terrorists and criminals must be fought and destroyed relentlessly so that the majority of us can live in peace and safety.’’

Buhari also pledged “to reinforce and reinvigorate the fight not only against elements of Boko Haram, which are attempting a new series of attacks on soft targets, kidnappings, clashes between farmers and herdsmen, in addition to ethnic violence fuelled by political mischief makers.

“We shall tackle them all.’’