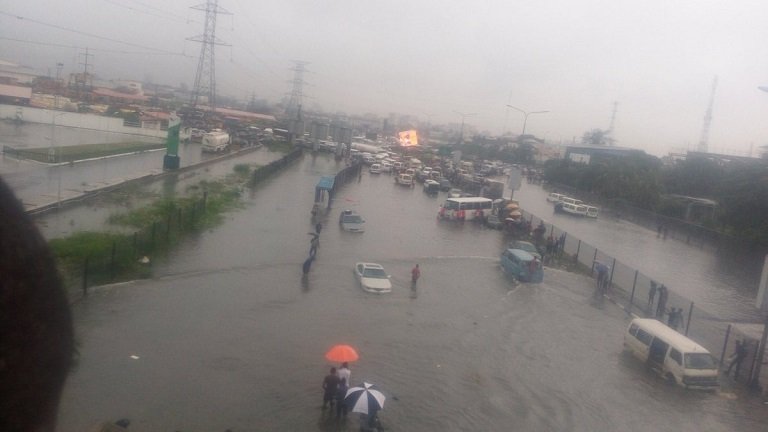 Lekki is trending on social media as residents of highbrow area on Lagos Island have lamented the heavy rainfall that has turned into a flood.

Many say they cannot leave their homes while others say their properties have been destroyed by flood that have taken over their homes.

Reacting to the flood on Twitter, Lagos Smart Driver wrote: “So you live in Lekki, Ajah, Badore, up to Sangotedo and still want to Uber. Let me shock you. It’s flood out there. Take a boat,” he tweeted.

Pamilerin Abiodun also shared her thoughts on the flood in Lekki. “Flooding is an annual phenomenon in Lekki, government will never pay attention, residents should dig gutter to minimise the flow.”

Ebenezer Olagunju blamed the flood on poor town planning. “When a developing area is not properly planned before selling out lands and erecting structures on it, Lekki’s present condition is inevitable.

Kemi Ariyo offered some advise to the Lagos State Government. “Lagos State needs to visit the northern states to see how they construct their drainage. Apply this to Lekki roads.”

Chronicle.NG gathered that Ikate, Ajah, Badore and Sangotedo were also affected by the persistent rainfall.

Here are some tweets on the flood in Lekki.

Are u people saying we can now use a submarine in Lekki right now? pic.twitter.com/COnucgm9VZ

The problem in Lekki is lack of proper drainage system.

Lekki is the new Venice of Italy pic.twitter.com/vQw6Pyzqu0

Lekki should become the new Paris, we just need canoe supplier & a statue of love at that phase 1 roundabout.

We have nothing to do with Biafra – UK