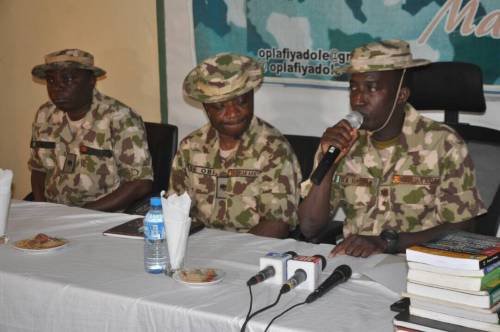 Three soldiers were, on Wednesday, sentenced to prison terms by a General Court Martial sitting at 7 Division Garrison in Pompomari, Maiduguri, Borno State, for unlawful possession of firearms.

The General Court Martial was inaugurated to try misconduct by officers and men fighting insurgency in the North East.

According to the statement, two of the soldiers, Eric Nwokere and Macaulay Fortune, were attached to Operation Lafiya Dole, the counter-insurgency initiative of the Federal Government. Each of them was sentenced to 23 years in prison for unlawful possession of firearms, an offense punishable under Section 27 (1) (a & b) (i & ii) of the Firearms Act.

At the time of their arrest, both were found to be in possession of five empty AK-47 rifle magazines and 20,136 rounds of 7.62mm ammunition. They were caught at Jumputu Motor Park, Jimeta, Yola, Adamawa State, while boarding a commercial vehicle to an unknown destination.

The third soldier, Corporal Garba Saidu, bagged a 10-year jail term for the same offense. He was charged for illegal possession of 2,800 rounds of 7.2mm (Special) ammunition, which he discovered in a poultry farm near Tipper Garage in Maiduguri metropolis. The farm is said to belong to a serving Police officer.