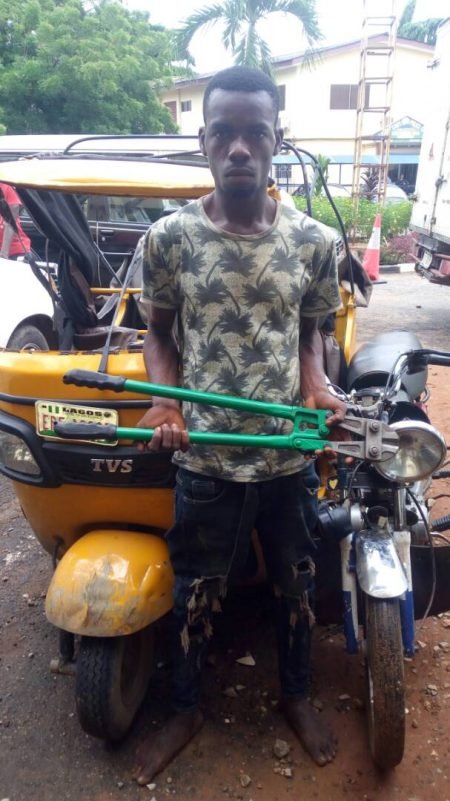 Operatives of Rapid Response Squad of the Lagos State Police Command have arrested an alleged member of a five-man gang that specializes in stealing tricycle, popularly known as ‘Keke Napep’, and motorcycles in the Lagos metropolis.

The suspect, Ekene Chukwuan, 21-year-old, was arrested in the early hours of Thursday after he and four other members of his gang broke into an apartment at 49, Falana Street, Iyana-Ejigbo Lagos, and carted away with one tricycle and one motorcycle at around 2:00 am.

Ekene, native of Enugu State, told the police during interrogation about how he was introduced into motorcycle and tricycle stealing business by his mentor named ‘Alhaji’.

“I relocated from Amukoko to Ijora in search for greener pasture because I was told there is money in Ijora and Mushin. I work as a truck pusher at Ojuade market where I helped people convey their goods from one location to another before Alhaji told me to stop the work for better one.

“Alhaji told me he was called for a work by one ‘Ajona’ and asked me if I will like to join in the job, promising me a better pay and less stress. I accepted Alhaji’s idea but didn’t know we are going for stealing,” he added.

“On getting to Ejigbo, Ajona who is the leader told us to stay in a place till night fall before entering into the apartment where we unchained a motorcycle and a tricycle. We put the motorcycle inside the tricycle while Ajona drove with two others in the tricycle.

“We were on our way when we met RRS men who stopped us but we refused to stop. So they (RRS) chased us. We were at full speed trying to escape when we crashed before taking to our heels, but the police caught me,” he confessed.

London attack: What we know so far

The owner of the motorcycle, Mr. Nduka Oyekachi Innocent, who was alerted of the theft and invited to RRS Office, said “I parked my tricycle in my compound at 49, Falana Street, Iyana-Ejigbo, and went to bed.

“I woke up the following morning only to discover that the keke was missing. I searched everywhere, including the drainages because I was so much devastated and worried about the debt and how to take care of my family.

“Immediately, I went to Ejigbo Police Station to report the incident before I was informed later that RRS officers have arrested one of the suspected thieves.”

Nduka, 31, noted that he wept like a baby on discovering that his keke was missing because he got the keke on hire-purchase from a businessman. He was to repay the sum of N1,000,000 within a period of one and half year according to the hire-purchase agreement he signed.

Recovered from the suspect were iron cutter, tricycle and motorcycle.

The suspect has been transferred to the Lagos Police State Criminal Investigation Department for further investigation.

London attack: What we know so far