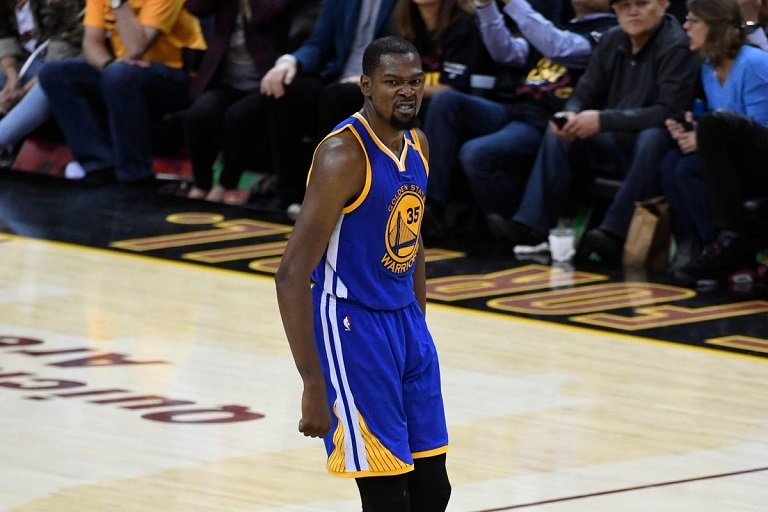 Kevin Durant had 31 points, 8 rebounds and 4 assists in Game 3

On the 10th anniversary of LeBron James’ NBA Finals debut, the King positioned his Cleveland Cavaliers to defend home court and spring back into this series.

Then, the Golden State Warriors reclaimed their spot as the league’s reigning two-way terror.

At least Cleveland made it interesting. This was only Golden State’s third playoff game decided by single digits in 15 tries—all of them wins.

Before the series shifted to Northeast Ohio, the Cavs had suffered a pair of defeats by 22 and 19 points.

Here are the videos from Game 3

LeBron James gets off to a quick start with 16 first quarter points! #NBAFinals pic.twitter.com/cJFVa19qVh

The @warriors set an #NBAFinals record with NINE 3PM in one quarter! pic.twitter.com/EVFJBkY0jw

The nine 1st quarter 3s from the @warriors is a new #NBAFinals record for 3s in a quarter. #DubNation pic.twitter.com/YFmuI4Cs96

Steals of the night

The steal. The slam!

The timing on this Steph Curry steal is unreal #Warriors pic.twitter.com/NicnYz7e9S

Here’s our assist of the night by Draymond Green

Draymond uses the vision to find Shaun Livingston for the #AssistOfTheNight! pic.twitter.com/wTQpOjPPT4

The dazzling display from Kyrie Irving continues into the 4th! He's up to 35 PTS.@cavs lead @warriors 102-95 on #NBAonABC. pic.twitter.com/Z8Jm1GEB8A

Its coast to coast from Kyrie

Kyrie Irving ends the first half in style! #NBAFinals pic.twitter.com/ve9OQV6dla

Kyrie is up to 21 points. @cavs have cut the deficit to one on #NBAonABC. pic.twitter.com/FAvxIZkHmr

Kyrie. Is. Going. To. Work. #DefendTheLand

And then there is Curry…

Conte does not want me at Chelsea anymore – Diego Costa