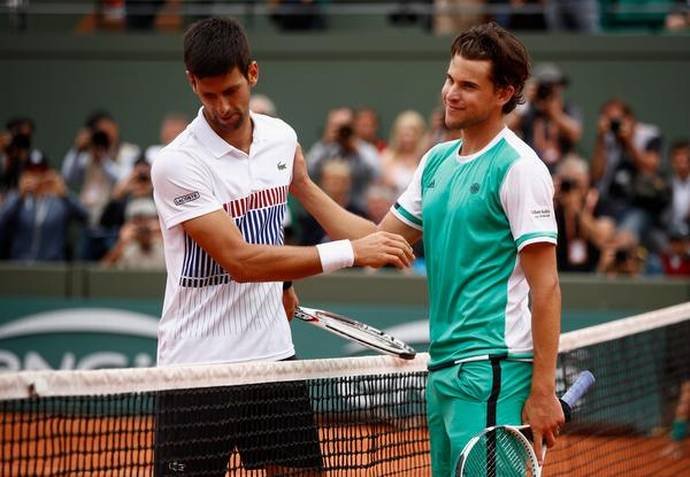 This was Dominic Thiem’s first win over Novak Djokovic (left) in six matches.

Sixth-seed Dominic Thiem produced one of his finest displays on clay Wednesday to knock holder Novak Djokovic out of the French Open.

And with that, the Austrian booked his “toughest opponent ever” , Rafael Nadal, in the semi-final at Roland Garros on Friday

Nadal is the fourth seed and Thiem’s problem is that the Spaniard is in ominous form, having dropped just 22 games during his charge into the last four.

Thiem is the only player to have beaten Nadal on clay this season, but the 23-year-old is under no illusion about the size of the task that awaits him in Friday’s semi.

“Because obviously now I beat Novak. On Friday is Nadal. In the finals there is another top star. That’s why it’s a slam because it’s such a tough achievement.”

Thiem, who plays with a single-handed backhand, said he needed to improve the defensive side of his game after struggling against the ferocious top-spin on Nadal’s forehand during their last few encounters.

“I just have to watch that I’m not giving him his favorite positions on the forehand,” he added. “I mean, it’s one of the best shots I think ever in tennis. So anyway, you cannot avoid it all the time. I will concede some winners on Friday.”

Thiem has put in some scintillating displays at Roland Garros this year and, like Nadal has yet to drop a set at the tournament.

“I like the conditions,” he said. It’s a fast clay court which fits my game very well.”

Nadal reached the semi-finals after compatriot Pablo Carreno Busta retired due to injury in their quarter-final.

The second Semi-final will be between world number one Andy Murray and a former French Open champion Stan Wawrinka.

Wawrinka is now eager to gain revenge on Andy Murray after setting up a re-match of last year’s semi-final.

The Swiss third seed broke the big-serving Cilic six times, spraying the court with winners throughout the match to ruthlessly sweep the seventh seed aside.

Wawrinka, who lifted the Musketeers’ Cup in 2015, ended Cilic’s ordeal on his first match point with a second-serve ace.

“Today was a perfect match for me, I thought I played very well from the beginning,” Wawrinka told a news conference.