Supremacy Battle: Davido, Wizkid take swipe at each other
Advertisement 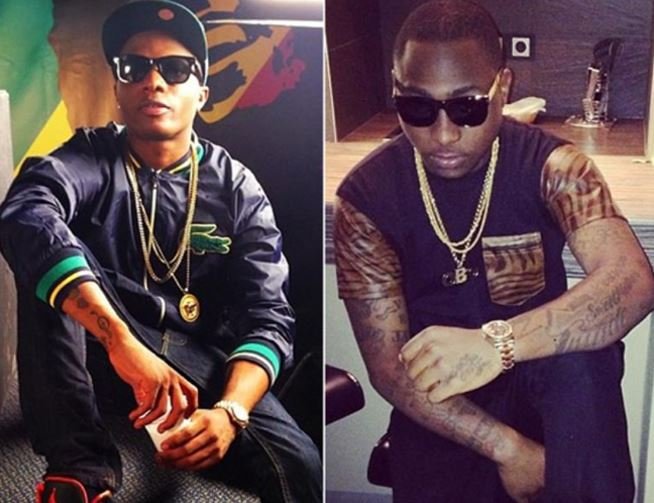 Wizkid and Davido used to be buddies

Who is better? Wizkid or Davido? Nigeria’s two leading artistes, two raves of the moment are locked in a supremacy argument in the social media.

The debate was triggered when Davido called out Wizkid in a Snapchat post:

Wizkid responded with a blast of three tweets on Twitter, one of which he has now deleted.

U can't hate on someone doing better than u in what u failed at! Learn and appreciate! Free ur mind from hate young kids ??

Wizkid in the deleted tweet said: The game is only for the real! Catch up or stay local! Don’t blame anybody for ur failures! Pray and work hard kids!

This response triggered the comparison debate between Nigeria’s two most successful artistes, at the moment.

There were comments, though, by peacemakers calling for ceasefire and saying the controversy was needless.

@iam_Davido put @wizkidayo on blast on Snapchat and wizkid had this to say on Twitter pic.twitter.com/lfBnU584yE

Wizkid should never have stooped low to reply davido tho… He is Levels above. Should leave davido to his childishness.

So wizkid feel he is doing better than Davido in the music industry at the moment ?

Madness no be until person pull cloth for street.

Davido has dropped 5 wizkid subs in 2017. Very bad. Face music. Ya'l good artistes FFS.. I love you guys but davido you have overdone it

Wizkid and Davido lately be giving us thrash lyrics, we just dy endure cus Wande Coal we trust choose food over us. ????

Twenty six year-old Wizkid, born as Ayodeji Balogun and Davido, 24 years old, with the full name, David Adedeji Adeleke, have collaborated before on stage, with the rivalry between the two now seen as unwarranted.

Both artistes had released blockbusters of late, with Wizkid now set to release his EP on 14 July. The belief is that Davido’s Snapchat was to second guess what Wizkid has to offer, but Wizkid refused to take it calmly.

How their relationship went sour is still not clear the duo used to be buddies with Davido publicly backing Wizkid when he had a fall out with blogger Linda Ikeji.

Wizkid is a Nigerian singer and songwriter. He started recording music at age 11 and managed to release a collaborative album with the Glorious Five, a group he and a couple of his church friends formed.

In 2009, he signed a record deal with Banky W.’s record label Empire Mates Entertainment (E.M.E). He rose to prominence in 2010 with the release of the song “Holla at Your Boy” from his debut studio album, Superstar (2011).

Wizkid’s self-titled second studio album, Ayo, was released in September 2014 and was preceded by six singles: “Jaiye Jaiye”, “On Top Your Matter”, “One Question”, “Joy”, “Bombay” and “Show You the Money”.