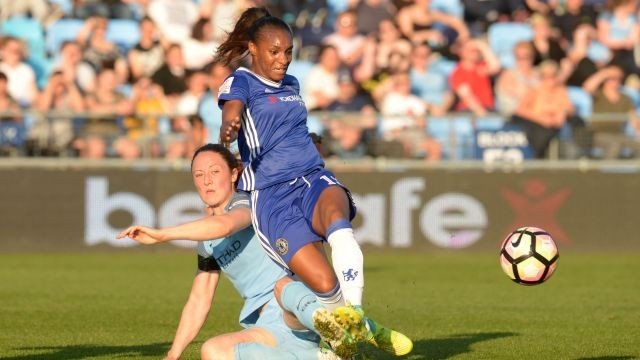 Chelsea Ladies moved top of Women’s Super League One with one match remaining with a 4-0 win at Bristol City.

The Blues will start the final day of the Spring Series leading on goal difference from Manchester City, who earned a late victory at Sunderland thanks to Georgia Stanway’s goal.

Third-placed Arsenal stayed within one point of the top two with a 1-0 home win over Reading.

And Yeovil earned their first point in the top flight, drawing at Birmingham.

Chelsea, City and Arsenal were each playing their game in hand on former leaders Liverpool, who drop to fourth place.

Down to the wire

Chelsea, 7-0 winners over Liverpool on Sunday, were in clinical form again in a professional display at Stoke Gifford Stadium.

After Millie Bright’s downward header gave Emma Hayes’ side a first-half lead, England’s Fran Kirby added a neat brace after the break before Switzerland’s Ramona Bachmann slotted in the fourth.

The result means Chelsea will win the title if they win at Birmingham on Saturday, barring a mathematical improbability.

Man City’s title hopes appeared to be slipping away before Stanway’s stoppage-time strike, while Arsenal’s only goal against a resilient Reading came from in-form striker Danielle Carter.

For bottom-of-the-table Yeovil, a goalless draw at FA Cup finalists Birmingham – in which both sides struck the woodwork – ended their seven-match losing run since winning promotion to WSL 1, while Birmingham climbed to sixth.