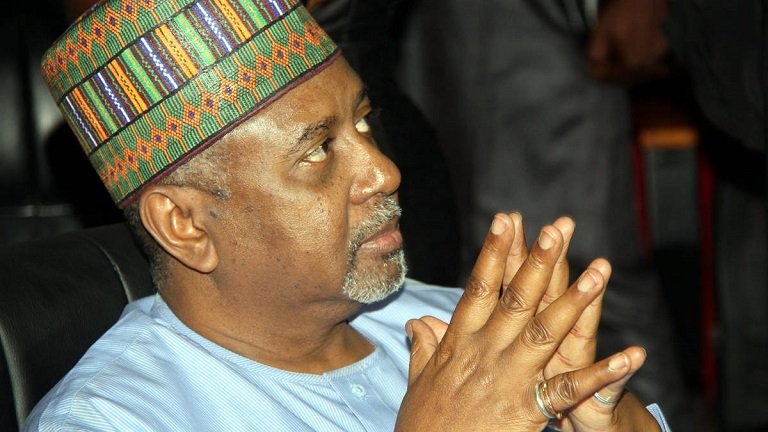 For the second time in a week, trial of Col. Sambo Dasuki (retd.), at a Federal Capital Territory, FCT High Court, Maitama, for an alleged N13.5 billion fraud, could not go on as expected, as the former National Security Adviser, NSA, was again absent in court, May 17, 2017.

Dasuki, along with Shuaibu Salisu, a former Director of Finance and Administration, Office of the National Security Adviser, ONSA; Aminu Babakusa, a former General Manager, Nigerian National Petroleum Corporation; Acacia Holdings Limited and Reliance Referral Hospital Limited are being prosecuted by the Economic and Financial Crimes Commission, EFCC, on a 19-count charge bordering on money laundering and criminal breach of trust to the tune of N13,570,000,000.

Prosecution counsel, Rotimi Jacobs, SAN, had at the last sitting of May 16, 2017, told Justice Husseini Baba-Yusuf, that “I’m surprised he’s not here”.

Counsel to Dasuki, J.B. Daudu, SAN, had also expressed concerns about the absence of his client “who though has been granted bail by the court has not been allowed by the DSS to have control over his movement”.

Daudu had along with Akin Olujinmi, SAN counsel to Salisu, who was present with Babakusa, urged the court to adjourn to May 17, 2017 and compel the prosecution to present him.

At the resumed hearing today, however, Jacobs informed the court that his frantic efforts to ensure that Dasuki was present, proved abortive.

He said: “Yesterday, I promised he’ll be brought to court today, and I immediately contacted the director, legal department of DSS, who told me that Dasuki’s absence in court yesterday was an oversight and that the defendant will be produced this morning.

“I made series of efforts when I noticed he was not in court this morning to contact the director, but was unable to reach him, and I immediately contacted my client, the EFCC, who also approached the DSS.

“The information I received is that the first defendant will not come to court today on the grounds that he’s indisposed.”

Jacobs, thus requested for an adjournment.

While not opposing the application for adjournment, Daudu, noted that “this appears to be an inter-agency issue”, and urged the court to “place on record that we’re not trying to frustrate this trial as adjournment is at instance of the prosecution”.

Olujinmi, who aligned with Daudu, added that “it is the prosecution that has not allowed the trial to proceed”, adding that the excuse of “oversight” on the part of the DSS, “without an apology was irritating”.

“Your lordship should direct that those keeping him in custody should ensure they’re alive to their responsibility to the court,” Olujinmi added.

While adjourning to July 11 and 12, 2017 “for continuation of hearing”, Justice Baba-Yusuf, held that “the proceedings of the court should not be taken lightly, and strains between agencies should not be allowed to interfere with proceedings”, adding “the prosecution counsel, whom I know is passionate with his work should be allowed to do his job”.