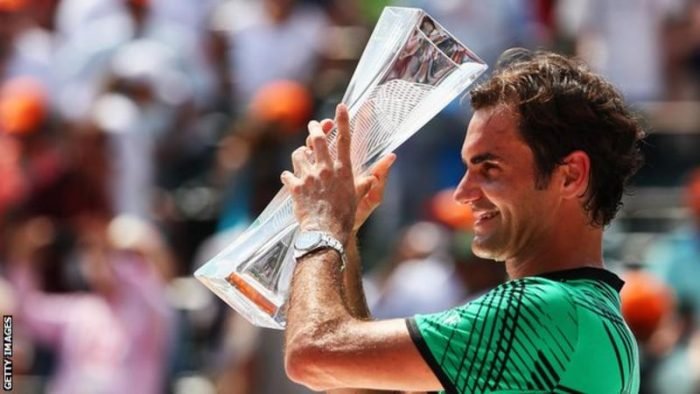 Roger Federer has won 19 of his 20 matches this season

Roger Federer overcame long-term rival Rafael Nadal to win the Miami Open for the third time and continue his remarkable start to the season.

The 35-year-old built on January’s Australian Open win and his March Indian Wells success with a convincing 6-3 6-4 win over the Spaniard.

The pair shared 10 break points in the opening set, with Federer the only man to take one to crucially move 5-3 up.

He exuded control throughout, breaking at 4-4 in the second and serving out.

A sweeping backhand down the line in the final game summed up the confidence which poured from the champion from start to finish as he moved to an 11-match winning streak and improved his record to 19 wins and just one defeat in 2017.

A fourth straight win over Nadal – his longest winning streak in their 13-year professional rivalry – also makes Federer the oldest winner of the Miami Open.

He looked cool and calm throughout and his dominance this year is perhaps all the more remarkable given he took six months off through the second half of the 2016 season to recover from a knee injury.

“The dream continues,” he said after the win. “It’s been a fabulous couple of weeks. What a start to the year, thank you to my team and all who have supported me, especially in my more difficult challenging times last year.”

Federer triumphed in his first tournament after the lay-off, beating Nadal in five sets at the Australian Open, but this time around, the Spaniard rarely looked like he would land a first Miami title in what was his fifth final.

“It’s disappointing that every time in my career I have stood here I get the smaller trophy,” he said. “It’s been a very good two weeks for me. Even if I lost for the third time this year to Roger it’s a good start, playing three finals.”

Nadal – who also lost to American Sam Querrey in the Mexican Open final this year – failed to take two break points in the opening game of the match at Crandon Park Tennis Center and defended two successfully to level at 2-2.

The pair traded break points relentlessly – there were 10 inside the first eight games – with Federer finally taking the last in that run. His punishing cross-court forehand set up the break and when Nadal found the net moments later, he found himself 5-3 down.

Though the first six games of the second set went with serve, Federer always held more comfortably. He forced a first break point at 3-3, only for Nadal to expertly read a cross-court effort with the pair exposed at the net.

Nadal’s consequent fist pump evoked memories of see-saw exchanges they have shared over the years and he punched the air after defending a second break point to take the game – showcasing belief he could yet disturb Federer’s seemingly unflappable rhythm.

But at 4-4, a Federer backhand just crossed the net after hitting the tape, forcing Nadal to race forward and desperately flick the ball back, leaving his court exposed for the 18-time Grand Slam winner to deliver a telling lob.

It gave him the chance to serve out the win and Nadal went long moments later, ensuring Federer’s stellar start to the year continued.

Recession cause for high divorce rate in Nigeria