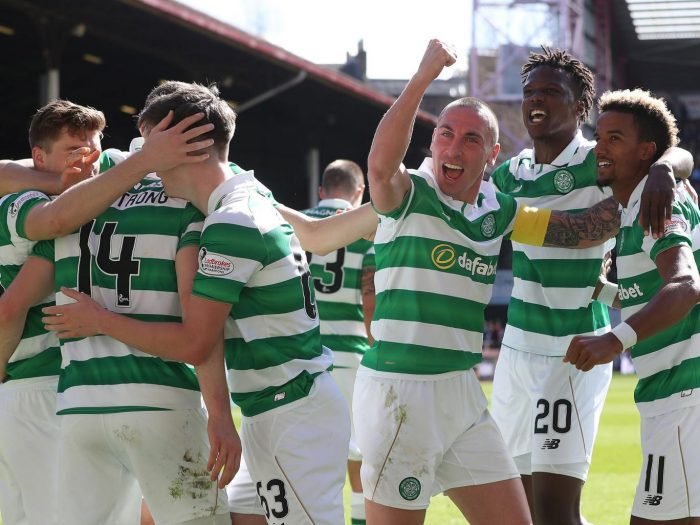 Celtic have won a sixth consecutive Scottish Premiership title with eight games to spare after thrashing Hearts 5-0 at Tynecastle on Sunday.

Brendan Rodgers’ side needed three points against fifth-placed Hearts to be confirmed as champions after Aberdeen hammered Dundee on Friday.

And they did so with a hat-trick from Scott Sinclair and goals from Stuart Armstrong and Patrick Roberts.

Unbeaten Celtic have dropped just four points so far during their campaign.

“My job when I came in was to win it in the best way we possibly could,” said Rodgers.

“We have had many outstanding performances, but we have only just begun because there’s still an awful lot of development in this team. That’s the real exciting part.”

What’s left to play for this season?

Celtic are still on course to win the domestic treble, having beaten Aberdeen in November to win the League Cup, while they face rivals Rangers in the Scottish Cup semi-finals later this month.

The last time the club won all three major Scottish domestic trophies in one season was 2000-01 and the feat has only been achieved once since – when Rangers claimed a treble in 2002-03.

“The run we’re on is incredible,” said Rodgers in an interview with Football Focus prior to Sunday’s title-clinching victory.

“In terms of the treble, we never really mention it. Obviously the supporters can dream, which is great, but we have to just think about performing and playing well.”

The last time a Scottish side went a full season unbeaten was Rangers in 1898-99, while Celtic did the same the year before – but the season only lasted 18 games.

Early wobbles but a path to Europe

Former Liverpool boss Rodgers was appointed in May 2016 to replace Ronny Deila, who quit at the end of last season after two mixed years in charge.

Deila led Celtic to back-to-back titles but failed to deliver success in Europe, losing to Maribor and Malmo in the last round of Champions League qualifying and also finishing last in their Europa League group in 2015-16.

Rodgers’ first major task was to qualify for the Champions League group stages, only for Celtic to suffer arguably the worst defeat in their history against Gibraltarian part-time side Lincoln Red Imps in the second qualifying round first leg.

After winning the second leg to progress, they needed a stoppage-time penalty from Moussa Dembele to edge past Kazakh side Astana in the third qualifying round before hanging on away to Hapoel Beer Sheva of Israel to reach the group stages.

Once there, they suffered their heaviest European defeat in a 7-0 thrashing by Barcelona but recovered to secure two draws against Premier League side Manchester City and a draw at German side Borussia Monchengladbach.

“We need a couple of players in order to compete at Champions League level – we had some really good performances but there is certain dynamic, power and technique we need,” Rodgers told Sky Sports after Sunday’s title win.

Yet the club were not left short of attacking talent after the signings of Dembele from Fulham and Scott Sinclair from Aston Villa.

Dembele, 20, has scored 32 goals this season and is now one of Europe’s most sought-after talents, while 28-year-old winger Sinclair has struck 21 times in all competitions.

Rodgers has also improved the fortunes of players he inherited, most notably 25-year-old central midfielder Stuart Armstrong, who has impressed since becoming a regular starter after October, making his Scotland debut in March.