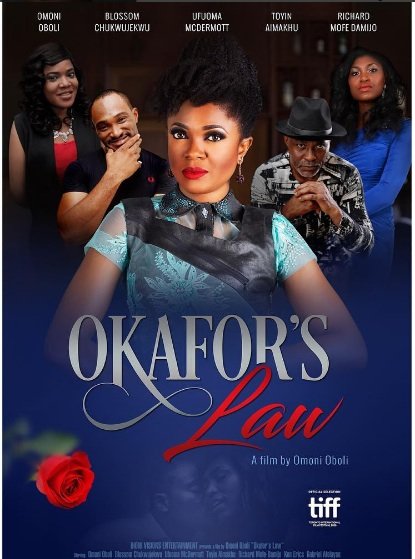 A Federal High Court in Lagos on Thursday, vacated an interim order, which restrained the premiering and release of Nollywood movie, “Okafor’s Law”

“Okafor’s Law” is a film Produced by actress and Director, Omoni Oboli.

Justice Ibrahim Buba had on March 24, granted an interim order, stopping the premiere of the said “Okafor’s Law” scheduled to hold on the evening of same day.

The exparte order, had consequently, halted the premiere of “Okafor’s Law” at the IMAX Cinema in Lagos, as well as suspending its planned release on March 31.

The judge had issued the orders, following an exparte motion filed by a company Raconteur Production Ltd, on behalf of a Canada based script writer, Mr Jude Idada, seeking same reliefs.

Joined as defendants in the suit are: Dioni Visions Entertainment Ltd, Omoni Oboli, and The Filmone Ltd.

In a short ruling on Thursday, Justice Ibrahim Buba vacated the interim orders, and paved way for the release and launch of the film, after entertaining arguments from both counsel to the plaintiff and defendants.

Buba held: ” The court shall resist the temptation of making any pronouncement on the substance of the matter at this interlocutory stage.

“Suffice to say that surely what is exhibited by the plaintiff is a script “The Bet” and not “Okafor’s Law and so this court has no doubt that the plaintiff/applicant cannot sustain this application.

“Even though the applicant moved the court to granting an order exparte, thank God the side of the defendant is heard.

“I do not think that on the face of the counter affidavit, this court will exercise it’s discretion both judicially and judiciously in granting the motion for interlocutory injunction.

“This court is unable to grant the interlocutory orders sought by the applicant; the prayer is hereby refused and the interim orders made on the 24th day of March is accordingly vacated.”

Earlier, arguing for the grant of an interlocutory injunction, counsel to the plaintiff, Mr A.K Oragu had urged the court to grant the orders as prayed on the grounds that there is the need to establish the legal rights of the plaintiff.

According to Oragu, section 51 of the Copyrights Act, clearly establishes the right of the plaintiff, adding that the plaintiff had an assignment with respect to the script in question.

He argued that under the Act, an author is the owner of the copyright, adding that the “art work” in respect to the movie “Okafor’s Law”, belonged to Jude Idada who later assigned same.

He submitted that the movie industry was the eye of morality, adding that if the movie “Okafor’s Law” is allowed to be launched in the wrong name, then the entire process is wrong.

He urged the court to grant the interlocutory orders.

Responding to the application, counsel for the defendant, Mr Augustine Alegeh (SAN) urged the court to refuse the application for interlocutory injunction.

Alegeh argued that the applicant seeks to stop the premiere of an already completed film, “Okafor’s Law” whereas, his challenged is based on a script titled “The Bet”.

He argued that the script is clearly different from the movie.

He recounted before the court the various losses suffered by the defendant as a result of the court’s order, which led to a failed premiere of the movie on March 24.

He added that all guests including children, were already seated at the Cinema, but were disappointed to hear about the injunction.

He urged the court to allow the scheduled release of the movie billed for March 31 (tomorrow), adding that where such grant is found to have been undeserving, then the various damages sought by the plaintiff would suffice.

Alegeh urged the court to vacate the interim orders and grant his prayer.
The court has fixed April 3 for hearing of the new suit.

Idada lays claim to the film “Okafor’s Law” as his intellectual property, and had accused Oboli of copyright infringement.
He added that she had stolen his story idea for the movie in September 2016, adding that Oboli took the work he had done regarding “Okafor’s Law”, and developed it without giving him due credit.

He avers that the producer went ahead to set March 31, as a release date for the movie, inspite of a demand letter sent to her, as well as a copyright infringement suit instituted.

In her counter affidavit, deposed to on behalf of Dioni visions Ltd by one Tomi Adeoye, Omoni avers that sometime in 2014, the second defendant (Omoni Oboli) came up with the story idea of “Okafor’s Law”.

She explains that “Okafor’s Law” is a principle in which ex lovers could always rekindle their love or relationship, even after they are married to other partners.
She says that in accordance with Nigerian Law, both Oboli and her company (Dioni Visions) proceeded to register the film with the National film and video censor board.
She says that having secured their legal right to the said film, they contracted Jude Idada to write the screen play for a fee of N750,000 although no written contract was executed.

According to the deponent, Oboli later had a meeting with Idada, where she revealed to him the story idea and concept of “Okafor’s Law”, to enable him have a good grasp of the subject for a proper development of the screen play.
She avers that when Idada was contacted thereafter, he claimed that the work he had done on the film was lost when his computer was stolen in Uganda, and promised to re-write the screenplay.

The deponent avers that when several attempts to reach Idada for the script failed, they decided to write the screen play and thereafter produce the movie Okafor’s Law.

The defendant therefore, claims that jude Idada is not the owner of the story and idea of “Okafor’s Law, and does not possess any copyright in respect of same.

Nigeria to fast-track deployment of ambassadors