US Senator forbidden from speaking on Senate floor
Advertisement 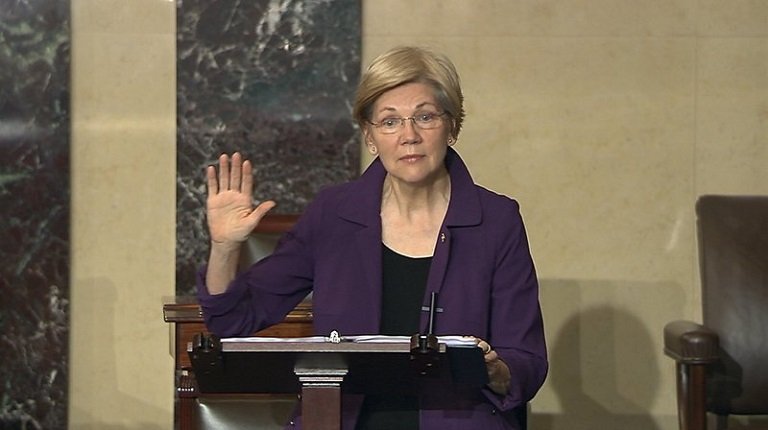 Senator Elizabeth Warren has been forbidden to speak on Sessions screening

Senator Elizabeth Warren has earned a rare rebuke by the Senate for quoting Coretta Scott King on the Senate floor.

The chamber is debating the Alabama Republican’s nomination for attorney general, with Democrats dropping senatorial niceties to oppose Sessions and Republicans sticking up for him.

King wrote that when acting as a federal prosecutor, Sessions used his power to “chill the free exercise of the vote by black citizens.”

Quoting King technically put Warren in violation of Senate rules for “impugning the motives” of Sessions, though senators have said far worse stuff. And Warren was reading from a letter that was written 10 years before Sessions was even elected to the Senate.

Still, top Senate Republican Mitch McConnell invoked the rules. After a few parliamentary moves, the GOP-controlled Senate voted to back him up.

Now, Warren is forbidden from speaking again on Sessions’ nomination. A vote on Sessions is expected Wednesday evening.

Democrats seized on the flap to charge that Republicans were muzzling Warren, sparking liberals to take to Twitter to post the King letter in its entirety.

Warren argued: “I’m reading a letter from Coretta Scott King to the Judiciary Committee from 1986 that was admitted into the record. I’m simply reading what she wrote about what the nomination of Jeff Sessions to be a federal court judge meant and what it would mean in history for her.”

Warren was originally warned after reading from a statement by former Sen. Edward Kennedy, D-Mass., that labeled Sessions a disgrace.

Democrats pointed out that McConnell didn’t object when Sen. Ted Cruz, R-Texas, called him a liar in a 2015 dustup.

The episode was followed by lamentations by Senate veterans, including its most senior Republican, Orrin Hatch of Utah, about how the Senate is too partisan.