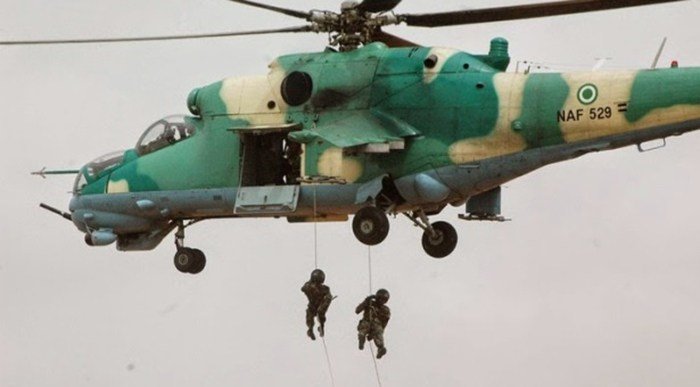 Nigeria’s fighter jets have been flying over The Gambia as West African regional forces continue to flex their muscles ahead of a military intervention to oust former President Yahya Jammeh.

Jammeh has refused to step down for the swearing in of President-elect Adama Barrow.
.
Jammeh’s fourth five-year term as president expired at midnight on Wednesday but he has refused calls to step down following his defeat in last month’s elections.

Lamin Njie a resident of Lameng, a small town several kilometers from the capital Banjul told the African Press Agency that fighter jets have been flying overhead since the early afternoon.

Lameng is a few miles from the country’s only airport in Yundum, African Review reported.

Noting the same experience on his Facebook page, Kebba Sanneh a resident of Gambia’s biggest town Serrekunda wrote ominously: “This war is almost here…I can hear fighter jets hovering overhead fast as they circulate and disappear into the horizon towards the Atlantic. Call it warning but there is high probability that the skies over this little republic will be busy in the hours and days ahead…..”.

Although The Gambian military has no known fighter jets, there were reports of anti-aircraft guns being positioned in the approaches to major towns and barracks.

Aside from jets Nigeria’s newest warship had been deployed to the waters overlooking State House in Banjul where former President Jammeh appears to be holed up after rejecting a last-ditch attempt by the Mauritanian leader to persuade him to step down.

Meanwhile as Ecowas ground troops amass inside the Senegal border to the north and south, the streets of cities and towns in The Gambia remain eerily deserted and quiet throughout Thursday as civilians stay indoors amidst a sense of angst over a likely invasion.

The Gambian army chief Ousman Badjie was widely quoted on Wednesday as saying that his men will not resist the invaders.

Badjie who had initially pledged “unflinching loyalty” to Jammeh in the weeks before his term expired was heard saying his soldiers will not be involved in an election dispute between politicians.

Meanwhile in view of the political uncertainty in The Gambia incoming President, Adama Barrow will be taking the oath of office in The Gambian embassy in Dakar, Senegal where he has been staying since Sunday after attending a summit in Bamako, Mali last weekend.

Barrow’s inauguration will held on home soil at a later date after the political crisis in his country is resolved.