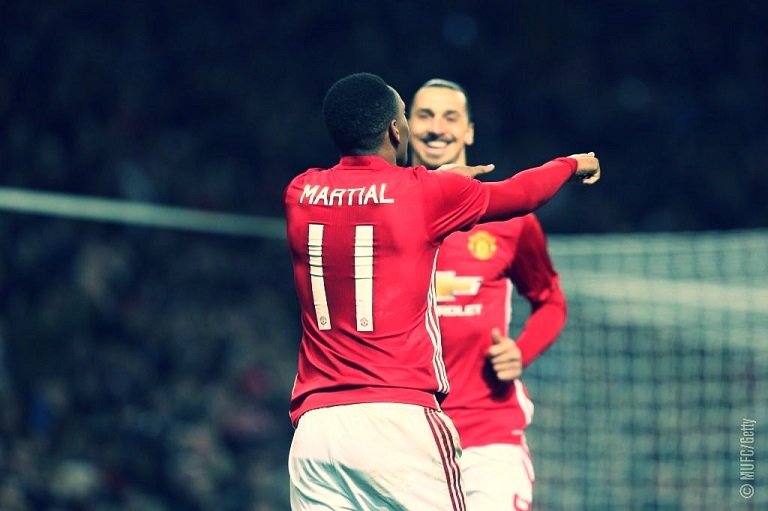 Manchester United have a golden opportunity to haul themselves into the Premier League title race at the expense of bitter rivals Liverpool this weekend, while leaders Chelsea will look to steady their nerves at Leicester.

United go into the Old Trafford showdown in fine fettle after beating Hull in the League Cup semi-final first leg in midweek to extend their winning streak in all competitions to nine matches.

But victory on Sunday, with Mourinho calling for United fans to raise the roof, would be a significant statement of intent.
Zlatan Ibrahimovic has been a key figure in United’s recent surge and despite his team’s current position the Swedish striker has set his sights on adding a Premier League medal to the league titles he won in Spain, Italy, France and Holland.

“I’m chasing the head trophy, the Premier League, that is my aim,” said Ibrahimovic, who has 13 league goals this season.

“I try to help the team and do what I’m best at — scoring goals, playing good and creating chances for my team-mates.”

In contrast to United, Liverpool — after emerging as title contenders thanks to a four-match winning run in December — have suffered a dip.

A draw at Sunderland in the league was followed by an FA Cup stalemate against fourth-tier Plymouth and a 1-0 defeat in the League Cup semi-final first leg at Southampton.

Manager Jurgen Klopp will hope the return against Southampton of Brazil forward Philippe Coutinho after seven weeks out with an ankle injury provides a timely boost for his team, who were held to a 0-0 draw by United in October.

– Unhappy return? –
By the time Liverpool kick off at Old Trafford they could be eight points behind Chelsea, who face struggling champions Leicester at the King Power Stadium 24 hours earlier.

Chelsea’s 2-0 defeat at Tottenham last week halted their 13-match winning run in the league, but the west London club received a welcome boost in midweek with the news that their plan to redevelop their Stamford Bridge stadium into a 60,000-capacity arena has been approved.

On the field, midfielder N’Golo Kante will make a first appearance at Leicester since his £30 million pre-season transfer.

Kante was the driving force behind Leicester’s incredible title triumph and his absence has been felt as the Foxes have slumped to within six points of the relegation zone.

Leicester boss Claudio Ranieri called on the club’s fans to salute Kante, but he hopes his side can make it an unhappy return.

“I hope our fans give to Kante a warm welcome as he was our champion. It’s important to remember what he gave to us,” Ranieri said.

“We respect Chelsea a lot but we are ready to fight and ready to try to win.”

Third-placed Tottenham can extend their winning run in the league to six matches when they host West Bromwich Albion, but boss Mauricio Pochettino isn’t getting carried away by that impressive success against Chelsea.

“Today it’s about maturity and learning from this period. It doesn’t mean that we will win every game,” he said.

“It’s important to show that maturity we did against Chelsea, that is important for trying to be more realistic and fighting for a bigger objective.”

Manchester City, in fourth, look to maintain the momentum from their FA Cup thrashing of West Ham when they travel to Everton, while fifth-placed Arsenal, eight points behind Chelsea, can’t afford a slip at second-bottom Swansea.

It will be an emotional day at Vicarage Road as Watford pay their respects to former manager Graham Taylor following his death on Thursday aged 72.

Taylor, who suffered a suspected heart attack, led Watford into the top flight twice in two spells lasting a combined 15 years and the club plan a minute’s applause and other tributes before their home match against Middlesbrough.

Related Topics:ChelseaManchester UnitedPremier League
Up Next