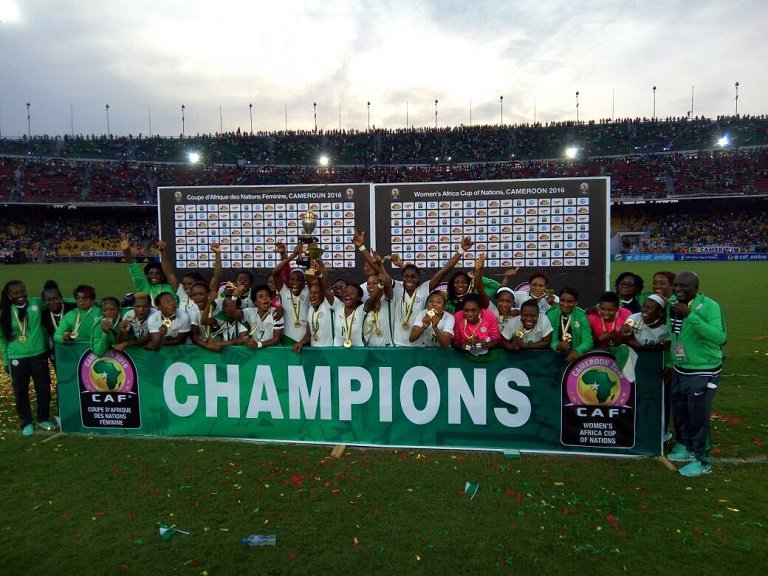 Socio-Economic Rights and Accountability Project (SERAP) has petitioned the UN Working Group on the issues of discrimination against women in law and in practice requesting the body to “use your mandates and position to urgently request the Nigerian government and the Nigerian Football Federation to end the discriminatory and unfair treatment of the players of the Super Falcons of Nigeria who recently won the African Women Cup of Nations.”

The organization urged the Working Group to “request the authorities to immediately pay each player of the Super Falcons of Nigeria the sum of $30,000 USD for winning the African Women Cup of Nations.

“This is the equivalent of what the government paid their male counterparts for winning the 2013 Africa Cup of Nations.”

The organization also asked the UN body to urge the Nigerian authorities to “End pay inequalities across the national teams and demonstrate commitment to fairness and equality in the treatment of both male and female players.”

In the petition dated 7 December 2016 and signed by SERAP executive director Adetokunbo Mumuni the organization said that, “It is unlawful to discriminate in pay arrangements in relation to sex or gender.

SERAP believes that the Nigerian government and the Nigerian Football Federation are required by law to have due regard to gender equality in all their functions, including within the national teams, and to take concrete measures to address the gender pay gap.”

The petition reads in part: “SERAP is seriously concerned about the large and stubborn gender pay gap between the Super Eagles’ players and the Super Falcons’ players.

“The discriminatory treatment of the Super Falcons’ players by the authorities is indicative of the systemic discrimination against women and girls in Nigeria, and the undervaluation of work commonly done by women.”

“While a State’s compliance with the obligations under these treaties is assessed in the light of financial and other resources, a lack of resources cannot justify inaction or indefinite postponement of implementation.

“This is particularly so when discrimination exists, as we believe it is the case with respect to the unfavourable treatment of the Super Falcons’ players.”

“SERAP also argues that the Nigerian government cannot use recession and the current economic situation in the country to objectively justify a difference in treatment of the players of the Super Eagles and the Super Falcons on grounds of sex.

“To hold otherwise is to undermine the integrity of the international human rights treaties and ILO conventions which Nigeria has ratified.”

“In fact, the Committee on Economic, Social and Cultural Rights (2009) has said that the failure to remove differential treatment on the basis of a lack of available funds is not an objective and reasonable justification unless every effort has been made to use all resources that are at a State party’s disposal to eliminate the discrimination, as a matter of priority.”

“SERAP argues that the failure by the Nigerian authorities to pay the players of the Super Falcons as promised violates the players’ right to equal pay, which is a fundamental tenet of gender equality.”

“SERAP believes that the male and female national teams deserve equal pay systems that are transparent and value the efforts put in by these players.

“The Nigerian government and the Nigerian Football Federation have continued to refuse and/or neglect to pay the Nigerian champions their bonuses and allowances.”

“According to reports, following the success of the female national team the Super Falcons of Nigeria in the African Women Cup of Nations each player was to receive N11 Million Naira ($25,000 worth in bonuses and allowances over the tournament’s stretch).

“However, instead of fulfilling their commitment to the players, the Nigerian government and Nigerian Football Federation offered the players 2 bags of Rice and 5 litres of groundnut oil and 50,000 Naira, which the players rightly rejected.”

“This discriminatory and unfair treatment is further buttressed by the fact that each Super Falcons’ player receives a paltry sum of $50 while each Super Eagles’ player is paid $4000 for a draw and $5000 for a win.

“Yet, the Super Eagles has not over the years been as successful as their female counterparts.”

“The Universal Declaration of Human Rights states that “Everyone, without any discrimination or distinction of any kind, has the right to equal pay for equal work”.

This right to gender equality and equal pay for equal work is also contained in major human rights treaties such as the International Covenant on Economic, Social and Cultural Rights and the International Convention on the Elimination of All Forms of Discrimination Against Women both of which Nigeria has ratified.”

“SERAP notes that article 11 of the CEDAW convention in particular guarantees the right to equal remuneration, including benefits, and to equal treatment in respect of work of equal value, as well as equality of treatment in the evaluation of the quality of work.

Related Topics:FGNFFNigeriaSERAPSuper Falcons
Up Next