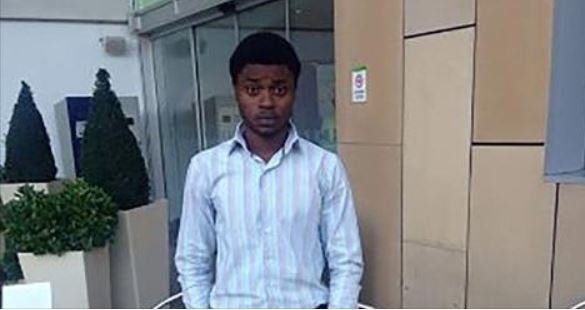 A Computer sciences student Peter Odukoya, 27, has been jailed for sexually assaulting a 20-year old woman in the United Kingdom.

The brave young woman trapped her sex attacker by secretly recording her ordeal on her mobile phone. Police heard the woman pleading: “I don’t want this. I’m very drunk”.

Cardiff Crown Court heard Odukoya offered the 20-year-old a lift home with friends on a girls night out after she recognised him from the same university.

He dropped the other friends off first – and headed back to his own flat with the drunken young woman.

But her “instincts kicked in’ in the car and turned on her phone’s recording app.

Her phone recorded her pleas for him to stop saying “Please, I have a boyfriend” and “I don’t want this. I’m very drunk”.

The court heard how he sexually assaulted her after she slumped on his settee despite her pleas.

She managed to push him off and lock herself in his bathroom, before ringing a friend to pick her up.

The girl later gave the disturbing recordings to police, and Odukoya was found guilty of sexual assault at Cardiff Crown Court.

Harry Baker, prosecuting, told the court: ‘She was left humiliated. It affected her grades.

“She says ‘it completely took my dignity away’.”

Andrew Davies, defending, said Odukoya had been suspended from his computer sciences course after the sex assault.

He said he had brought “shame” to his family in Nigeria, who had saved up to send him to study in the UK.

Mr Davies said: “His father has completely disowned him and cut him off from his family, which will affect him for the rest of his life.”

Recorder of Cardiff, Judge Eleri Rees QC told Odukoya: “This girl sat on your settee, and without warning you pulled down her trousers and her knickers.

“She pleaded with you to stop. She was extremely distressed.

“You have showed no remorse. You said nothing of a sexual nature occurred which was undermined by the recordings.

“You took advantage of a young woman who was very vulnerable.”

Odukoya, a computer science student, of Treforest, Pontypridd, was sentenced to a year in prison after being found guilty of sexual assault.

He will remain on the sex offenders register for 10 years, and given a restraining order against his victim for five years.