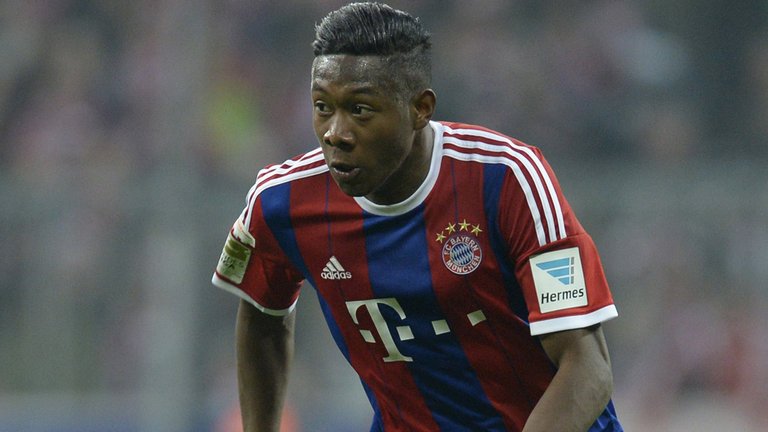 David Alaba is a target for Manchester United’s Jose Mourinho

Manchester City are planning a world-record bid in excess of £100m for Barcelona forward Lionel Messi, 29, next summer. They will offer the Argentine a £500,000-per-week contract. (Sunday Mirror)

City also want Brazil international left-back Alex Sandro, 25, whose current contract at Juventus ends in June 2020, with a release cause of £25.6m. If he signs a new deal with the Italian champions it would raise his transfer fee to £40m. (Sunday Mirror)

Mourinho is set to offer Chris Smalling, 26, a new Manchester United deal – despite the reported row over the defender’s fitness – but is also thought to be keen on Burnley’s Michael Keane, 23. (Sun on Sunday)

The Manchester rivals are both interested in Paris-St Germain full-back Serge Aurier, 23. The Ivory Coast defender has been linked with a move to Old Trafford but City have also been in touch with his representatives. (Daily Star Sunday)

West Ham are leading the race to sign Liverpool striker Daniel Sturridge, 27, with a bid of £25m enough to prise him from Anfield. (Sunday Express)

Former England midfielders Steven Gerrard and Frank Lampard are wanted by the Football Association for roles in the new-look England set-up after they both announced they will be leaving their clubs in the United States’ Major League Soccer. (Sunday People)

But Gerrard, 36, has been offered a playing deal at Chinese Super League side Hebei China Fortune, who are managed by former Manchester City boss Manuel Pellegrini. (Sun on Sunday)

Newcastle United will offer Frank Lampard a one-year playing deal if they win promotion back to the Premier League. Brighton will offer a similar deal if the club is playing in the top flight next season. (Sunday Express)

Lampard scored 15 goals in 31 appearances for New York, in a two-year spell that was interrupted by a loan spell at Manchester City

Chelsea manager Antonio Conte says he cannot offer Lampard, 38, a return to Stamford Bridge as part of his coaching staff until he ends his playing career. (Goal)

Blues goalkeeper Thibaut Courtois says the players should take the blame for last season’s 10th place finish, but they can now win the title under Conte. (Mail on Sunday)

Sunderland manager David Moyes wants to bring Stoke City striker Peter Crouch, 35, to the Stadium of Light to link up with his former Spurs and Portsmouth team-mate Jermain Defoe again. (Sun on Sunday)

Burnley boss Sean Dyche says the pressing tactics advocated by the likes of Jurgen Klopp and Mauricio Pochettino are nothing new: “You don’t have to be European to know teams have to work hard. English managers were talking about it years ago.” (Sunday Times)